Since our primary filming for the Final Straw documentary finished up last year, we’ve spent the majority of this year on translating and editing the film. Now, a year sounds like a long time to edit a film doesn’t it? We were surprised too at the amount of effort it has taken! So for this year-in-review, we thought it might be fun to take you through the process of editing the film, which started last Winter around this time. 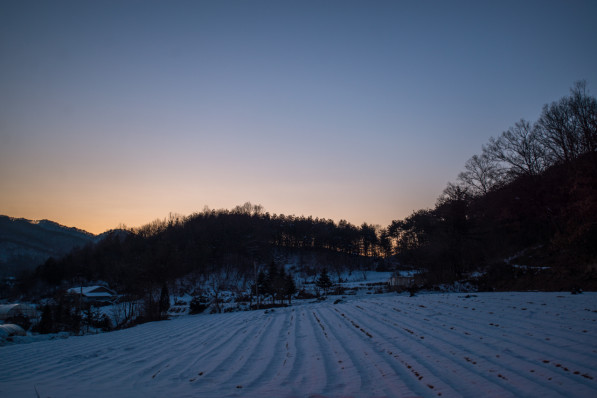 Transcription and Translation — By far the biggest task in terms of human power needed! It took dozens of volunteers to help us transcribe all of the interviews, which were in three different languages (Korean, Japanese, and English) into text.

Besides the raw transcripts, we also needed everything translated into English so that Suhee and I could collaboratively work with it to build a story from it all. Although working versions of all the text were done at the end of last year, the entire process was really only finalized in Summer of this year, as it required multiple review steps in different forms along the way.

Story Writing — After sorting through the initial text translations we cut our content down to about 80,000 words of usable material. It was only then that we began to craft a story.

My method of working with large amounts of information such as this? Print out all of the text, cut it into small pieces, throw it out on the floor, and then go about organizing it. 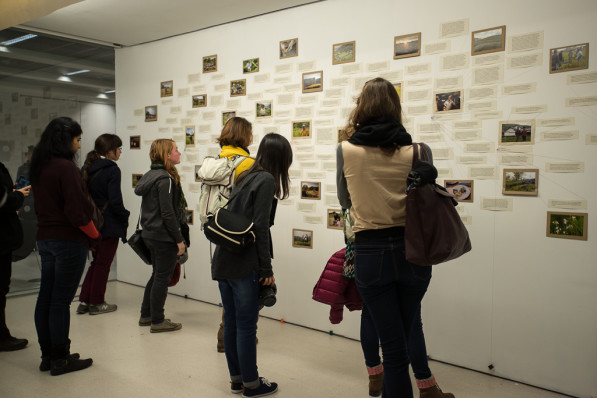 Those who have been following might remember that we turned this messy-sounding process into a show at Tent Gallery in Edinburgh. After that show, the real editing process began… and we were locked in a studio for much of the Winter season which, well, is mostly okay since the sun in an Edinburgh Winter rises around 9am and sets shortly after 3pm. Not much daylight to speak of! 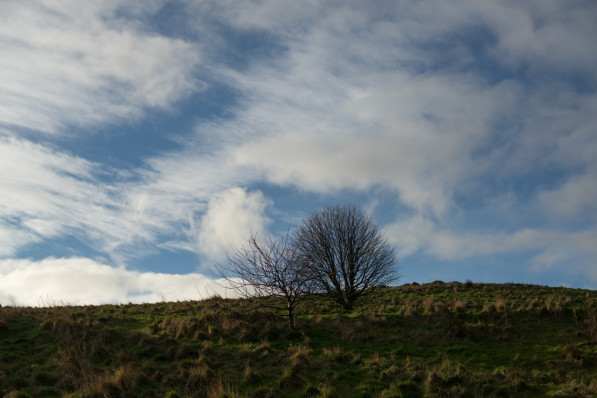 Assembling a Rough Cut — In early 2014 with the story loosely pieced together, Suhee and I began working on assembling a rough cut film based on what we had organized on paper.

This part of the process involved referencing our text manuscripts and translation files, then going through the interview footage and pulling out what we needed to use. Fortunately, Suhee could easily handle the Korean, I could easily handle the English, but we both very carefully (and slowly) had to work with the footage from the Japanese interviews. Thanks to some good notes from our translators and a limited ability to hear and read Japanese ourselves (with Google Translator when we got stuck) we were able to cut, organize, and subtitle all of the video footage which would make up our story.

As the editing continued, the skies grew brighter and the weather a bit warmer, and our animation ‘intern’ Heeyoung Park joined us in Edinburgh to work on a super top secret animation, which will be a companion to the documentary.

I think the weather instilled in all of us, a desire to get the heck out of the editing room more often, and so we did. 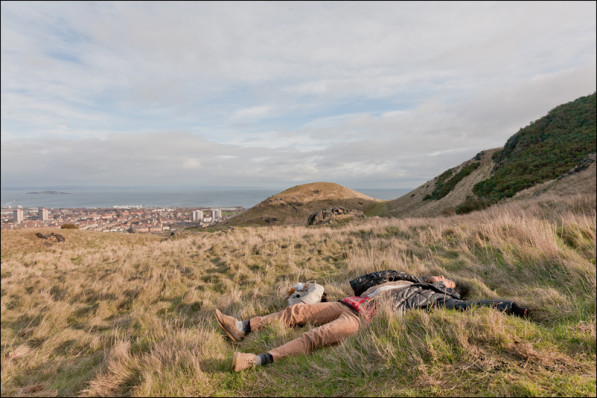 The three of us, seeing signs of Spring, started the Edinburgh Nature Mornings group. It went something like this: find a relatively sunny morning each week, send an invite out to a bunch of people, and ask everyone to put away all of their silly electronic devices for part of the day to go play in nature.

Holyrood Park (seen above) was one of our favorites for this experiment.

As Heeyoung came up with her concepts and sketches, I continued work on editing the film, including reviewing many hours of footage outside of landscapes, cityscapes, and travel and working scenes. Suhee helped with this, but also got to work on the task of coordinating translation of everything (all of which was in English by now) into Korean.

This initial process of writing, editing, and finishing translations carried us into Summer. 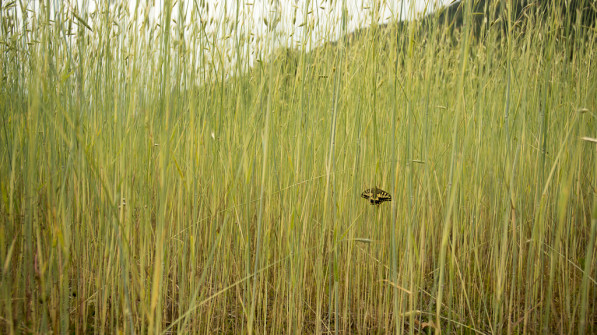 First Rough Cut Screening –In May we held two rough cut screenings for varied audiences in Edinburgh. This was the first time anyone had seen the film and this version was skin and bones, but it held the general story and idea of how we wanted to work with the content. Both feedback sessions in Edinburgh offered us some good insights as to where we could refine and work with the story.

MFA and a Residency Award — After the screening in Edinburgh, I celebrated earning my MFA from the University of Edinburgh’s “Art Space and Nature” program, and winning the Robert Callendar International Residency for Young Artists, an award which has much to do with the Final Straw related work carried out in gallery settings over the past two years in Japan, Korea, and the UK. The residency will take place this coming summer in Japan, and the following Summer in Scotland. It is an exciting honor, and in the name of an artist who was incredibly observant and aware of the details, both human and ecology related, of the world in which he lived.

Refining the Story — Following the completion of coursework in Edinburgh, I promptly flew out to Korea, where Suhee I were again offered a residency to take place during the Summer at “Small House” (작은집). It could not have come at a better time, as it gave us two months to concentrate on refining the film. During these months, we focused the story, worked with the sound, dug deeper into the characters and flow, and generally were able to finesse what was rough around the edges.

When it was ready, we again employed the help of Japanese and Korean translators and editors to watch the film and verify that all of what we had done was accurate. 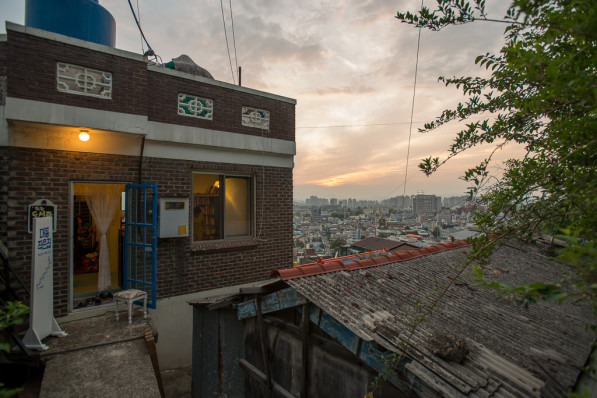 Of course, we worked a lot during the Small House residency, but we also took time to enjoy exploring and working with the community.

I hosted an informal weekly “English Village” meeting at our residency/library with local young people, and Suhee worked on her baking skills and shared the results with our neighbors and local shop owners. She even started incorporating some of the neighborhood-grown vegetables into cakes.

Vegetable cake, you ask? Yes. They were delicious, but you’ll have to ask Suhee for the recipe. I was only a consumer. 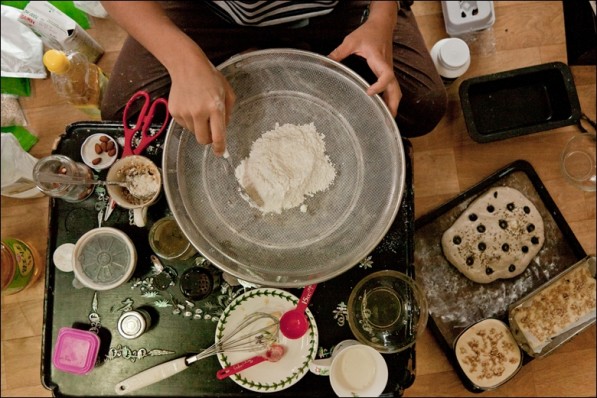 Suhee’s baking factory at the home

At the end of the Small House residency, we produced a little photo book about our experience interacting with the people and places, and then hosted three rough cut screenings of Final Straw in Korea, one at the residency, one in the heart of Seoul at Space Noah, and one at the farm where this whole film started in Hongcheon.

The Hongcheon screening was a very special event for us, as the farmer Seonghyun Choi was essentially the man who kick started us and helped guide our way through much of the learning which needed to happen as we embarked on this project.

It was also the most specialized audience of all the screenings, as most of the viewers were either local farmers, or people from around Korea who were very interested in Mr. Choi and what he was doing. And it was rather intimate, as all of us took a farm tour before the screening, and afterwards talked late into the night and fell asleep on the floor of the old Korean-style farmhouse, heated by a traditional ondol fire heating system. 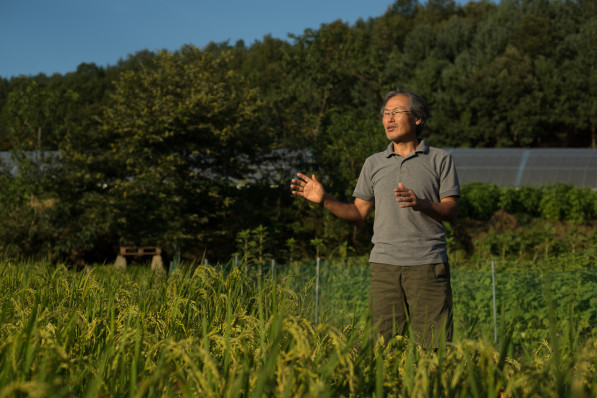 With the exception of this farm screening however, it was important for us during these rough cut screenings to invite audiences which represented a wide age range and wide range of beliefs.

This was a way to gather varied feedback, and to help in finding our core audience, but what also ended up happening was that the screenings were acting as catalysts for new connections and relationships between all of these people from different backgrounds who attended, many of who began to unite under the principals found within the film. 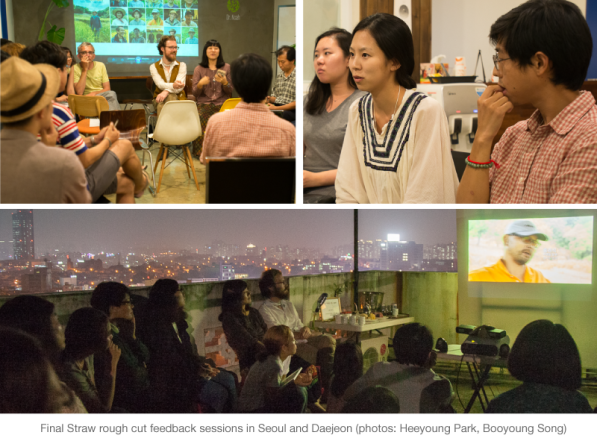 For us, that has was a really positive thing to see happening, and looking to the future, we’re excited to continue this trend of uniting people from wide-ranging backgrounds at our forthcoming public screenings and events. 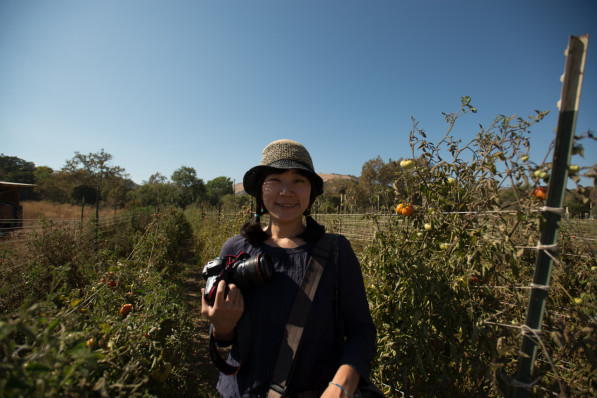 Suhee at Namu farm in the San Francisco Bay Area

Creating a Soundtrack –We are fortunate to have relationships with many forward thinking musicians in the USA, Korea, and Japan, several of who had the willingness and time to help in creating a moving and unique soundtrack for our moving and unique film.

By early Fall, music from Bomnoonbyeol (kalimba) and Joyful Island (world music) in Korea and Youji Kohno and Ben Nakamura (electronic noise) in Japan had already been worked into the film, and our last wish was to work with avant-garde wind musicians from Wind Sync who are based in Houston, Texas. With help from Syanne Cole, we were able to make that trip, and in November we recorded the final pieces of the soundtrack with Wind Sync in Texas. 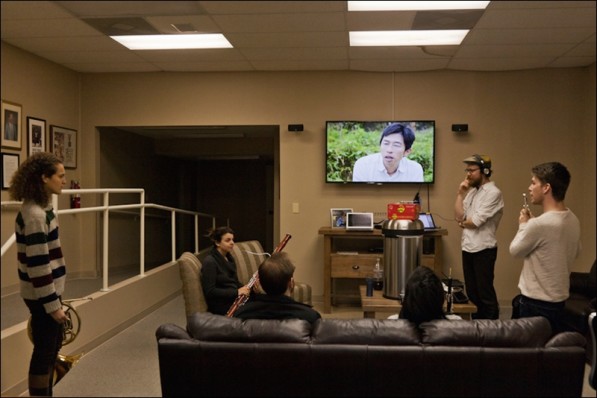 Final Rough Cut Screenings — Shortly after these final soundtrack recordings, we hosted our last round of rough cut screenings, this time in California, one with the students of Professor Robin Lasser at San Jose State University, and two small gatherings hosted by photographer Josh Hires at JP Impressions, and natural farmer Kristyn Leach at her home in Berkeley.

One of the four rough cut screening crews in California.

That pretty much brings us up to current, and currently speaking it was -27c when we woke up last weekend on a visit to the natural farm in Hongcheon. I think that means it’s Winter again.

So where do we go from here?

Well, we start the work to take this film out into the public! Come January we’ll be focused on our distribution plan. What this plan looks like is still in flux, but you can expect something that is far from the conventional paths for a documentary film.

Finally, for this amazing year, we’d like to thank all of you.

Every single person who has supported and continues to support this project in what ever way they can, whether it is through donating money, time, skills, telling us how much you appreciate or connect with parts of what we do, or by spreading the word and talking to others about the Final Straw.

Each bit of support is meaningful because it helps drive us each day to do what we do.

With that, we hope you all enjoy a happy holiday season and new year with the ones you love, enjoy the time on this earth, enjoy the warmth, the good food, the curling up by a fire (USA), the lying on an ondol heated floor (Korea), or kicking it on a warm beach (Brazil).

Wherever you are, whatever you are doing, we wish you peace and happiness.