The past few months have been busy for Suhee and Patrick, working in Japan from the small island of Megijima to produce the [HUMAN:NATURE] symposium.

With the help of Aichi University of the Arts — who, incidentally, have a natural farm class as part of their curriculum, how cool is that!? — we organized and hosted a farming symposium with two natural farmers of different backgrounds, and one ‘art’ farmer.

The symposium, titled [HUMAN:NATURE] was held on Megijima as a part of the Setouchi International Triennale, a unique festival which plans to draw 1-million visitors to 12 islands in Japan’s Seto Inland Sea this year.

The Setouchi festival is unique because it has an aim not merely of showing a bunch of artwork, but of “…returning vitality to the islands of the Setouchi Area, where nature and people harmonize together.” 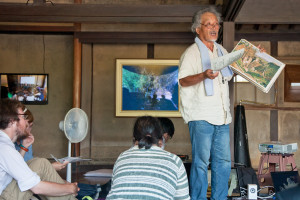 What a wonderful opportunity, we thought, to bring some farmers together who live their entire lives based on “harmonizing people and nature!”

For this symposium, we came together as a community, to learn from some of Japan’s most innovative farmers, and to understand how the connection between people and nature can help build a future for our environment and for our own local communities.

The farmers, Okitsu san, Kohno san and Matsuzawa san all understand the term ‘agriculture’ in slightly different ways, yet all three approach the growing of food in a manner which creates conditions for a healthy environment, a healthy people, and healthy culture.

Mr. Okitsu is a ‘natural farmer’ who believes that appreciating the beauty in nature must become commonplace. At the center of Okitsu’s farming practice is making healthy plants and healthy people.

Mr. Konho is from a line of rice farmers spanning three-centuries, Kohno believes that by the time farming appeared, humans had lost their primal connection with nature. This dis-connection in our human experience today, can only be filled by 1) art and 2) a deep appreciation for the natural world. As a solution, Konho hosts the yearly “Art de Tanbo” event in Kawaga.

Mr. Matsuzawa is a special breed of organic ‘no-till’ farmers. He works with small scale cyclic agriculture, in the belief that this type of ultimately sustainable system can teach us not only how to farm, but also how to live. For Matsuzawa, everything is born from the rice paddy.

The symposium was well attended by island residents, artists, farmers, and festival-goers. 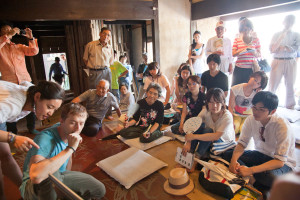 The [HUMAN:NATURE] symposium on Megijima, Japan is the second lecture event produced by the Final Straw, aimed at raising awareness of natural farming and the importance of the connection between people and our environment. This theme is at the center of our upcoming documentary, due to be released in Spring 2014.

For information on the documentary, or on hosting a lecture/symposium in your area of the world, please contact us.

For more, join our newsletter, and stay tuned for more as we update you on our final film interviews in Japan.