From our first meeting in South Korea, our similar interests in sustainability issues lead us to conduct a joint interview with a noted author and natural farmer in the Korean countryside. A short few days with Mr. Seong Hyun Choi showed us the beginnings of what was possible when the connection between humans and the environment are the basis for how we grow our food. 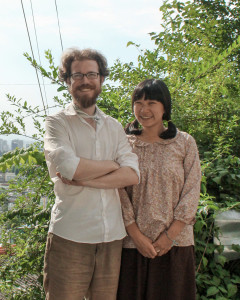 It’s hard for some to comprehend that the Final Straw film and events have thus far been created on a shoestring budget by two people with a camera and determination… and then you realize that it took directors Patrick Lydon and Suhee Kang three years, their entire life savings, and the help of a global cast of volunteer translators, coordinators, and musicians to get it done. It’s not always been easy, but in truth, it’s been like riding on a wave; an inspiring path filled with support from others, and with so much excitement for these ideas and how they can move us towards a truly equal and sustainable society.