What is Natural Farming

Popularly known as “do nothing” farming, natural farming (自然農法 / shizen nōhō, in Japanese) is an environmentally sustainable way of growing food, founded not in technique, but in the principle that an equitable relationship between farmer and nature should form the foundation of the farmer’s actions.i

Natural farming contrasts starkly with most contemporary forms of farming in that it is premised on developing closer relationships between farmer, land, and consumer, where as the industrial farming process—including industrial scale organic—requires the fundamental separation of these relationships. This point has proven to be a key element in natural farming’s inherent sustainability, while also proving to be a difficult concept for most Western students, who are used to more ‘process based’ approaches.

While techniques and methods vary widely, natural farmers share common roots in re-connecting themselves and their farming processes to the Earth, and cultivating food that inherently regenerates the health of the natural world—and of humanity.

The most well-known practitioner and philosopher of natural farming, Masanobu Fukuoka began his agricultural career as a plant scientist and agricultural disease and insect researcher. In the 1930s however, he came to a realization that his work was taking himself and others in his profession further away from truly knowing nature. At this point he gave up a career of “examining nature through a microscope,” and decided to invest the next half century of his life developing a way of living and farming in accordance with nature’s principles. ii

During his life, Fukuoka disseminated his findings liberally through writing and teaching on his farm in rural Shikoku, as well as through multiple international tours. His ideas were popularized from the late 1970s onward, through the publication of several books. His book The One Straw Revolution in particular, was a best-selling title and is often cited as a founding document of the alternative food movement.iii

Though Fukuoka coined the current day term, and popularized methods such as “seed-bombing” and “non-tillage,” natural farming is not so much a modern day invention, as it is a re-discovery of our human ability to develop meaningful relationships with the Earth and nature that we depend on for our very lives.

From this vantage point, natural farming is a form of agriculture that has been practiced in nearly every imaginable climate and culture around the world over many thousands of years of human history. It is a way of thinking and living that shares common roots with many Eastern religions, wisdom traditions, and the ecological mindsets of indigenous peoples from many—though of course not all—regions of the world. Recent research on traditional ecological knowledge shows us for instance, that most of the 100 or more Native tribes of California could be called natural farmers, as well agroecology research has shown the same of farmers in regions of South America and parts of Africa.iv,v

We might first, ask the question in context of our current farming system. Is the chemical industrial way of producing food realistic?

For this, there is a simple answer: there is no way for any system of production to continue, if it consistently takes more resources from the Earth than can be replaced. Our best science, as well as in-field practice, tells us very clearly that industrial-scale farming is absolutely, unquestionably, unrealistic. There is no way around this, and no amount of technology or innovation can ever reconcile the biological fact no farm can continue to feed the planet if it is based on extraction and pollution instead of regeneration of the Earth’s habitats and resources.

The proper question then, becomes: what are the alternatives, and how do we move away from our current destructive ways, towards more regenerative ways of farming and of living?

Both in historic and contemporary contexts, natural farming represents what are essentially the roots of the most sustainable form of food production known to the human species. Many researchers today—not to mention many practicing farmers—believe that the key to our future lies in developing a cultural-ecological understanding akin to that of natural farmers.

This also means looking into related fields of traditional ecological knowledge, and agroecology, which are helping uncover and support cultural wisdom in locally-aware sustainable farming.

Various courses, free schools, and community learning farms exist around the world (see the Study Materials section of this website) where one can gain practical experience with natural farming. However, there is no set of “natural farming techniques” which would be applicable to every person or every place. There are, however, a few reoccurring “principles” that nature tends to teach us as we walk the path of being and farming within it:

Natural farming principles have been worded in various ways over many years by many practitioners, but the above four principles represent the generally re-occurring practices of natural farmers around the world. They are expanded upon by Kawaguchi Yoshikazu in the film Final Straw: Food, Earth, Happiness, as well as in various publications, with works by Fukuoka—and his former pupil Larry Korn, author of One Straw Revolutionary—being the most prominent sources of practice-based information in the English language.vii 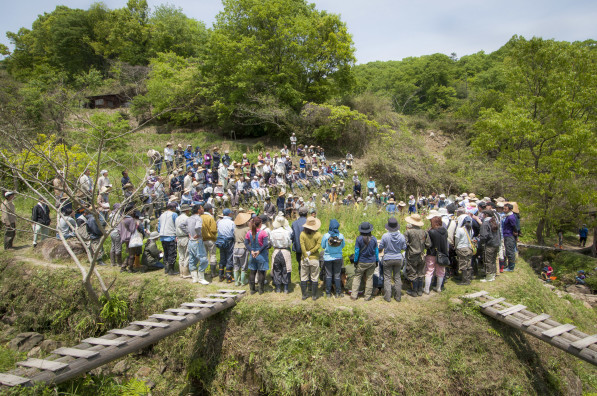 These principles are applicable nearly anywhere you might attempt to do natural farming.viii It is important to remember however, that they are not an authoritative set of natural farming rules! Indeed, for natural farming to be true, there can be no such thing.

A Relationship with the Land

Although the concept is intertwined with countless wisdom traditions, as well as some of today’s most advanced biological and physical scientific theory, it remains difficult for most Western students to grasp what exactly the phrase “connecting to nature” means. Books, theories, and philosophies—though at times helpful—can only point us in a general direction. Ultimately, it is up to each individual to go out into nature, and to begin learning by experiencing. If we can’t build a relationship with another human by reading a book about them, then certainly the same holds true for building a relationship with nature!

As Larry Korn reminds us, realizing natural farming’s true benefits requires us “to become partners again with other forms of life,” and this kind of learning can only be fully realized through real-world practice.ix Get out into nature. Let nature teach you.

From this view, natural farming is not only a way of growing food, but of finding ways to carry out every aspect of human life on earth in ways that regenerate our own health, the health of society, and the health of the environment around us. 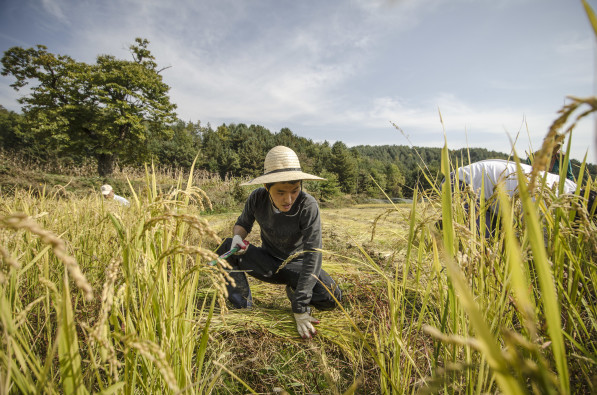 This in turn, is what makes natural farming such an extremely personal, creative, and exciting endeavor for us as individuals. Every day worked with this mindset offers with it, a chance to expand our relationship with this Earth, to develop our own unique voice, our skill, our craft as human beings, and to discover more about our role within this miraculous earth.

From this view, the only realistic way forward for humanity, the only way whereby we can ensure ecological well being while also supporting the wellness of the human population, is to engage in ways of producing food—and for that matter, of producing anything—that inherently re-connect human beings to the environment.x

In the end, cultivating a way of seeing and doing based in kinship between farmers, consumers, and nature, offers us ways to live more happily, peacefully, and sustainably, no matter what we choose to do for a living.

We hope you found this short overview useful. We also hope you will benefit from seeing Final Straw: Food, Earth, Happiness, a film that gives insights through the stories of natural farmers in Japan, Korea, and the United States. Making that film changed our lives and we hope it will in turn help others change theirs. If you are unable for any reason, to afford the small fee to download the film, please do not hesitate to contact us and we’ll help find an alternative.

We’ve also include a list of resources below that will be useful as you delve into the process of building your own relationship with nature.

Thanks for reading and good luck on your journey.

For the interested — or the skeptical — there is a lot to learn and importantly, to experience. Here are a few resources to get you started:

The Natural Way of Farming – Another of Masanobu Fukouka’s books, with practical applications and information on crop rotation, orchard management, pest management, etc…

How to Achieve Food, Earth & Happiness — a Final Straw crash course / reading list on food sustainability issues and solutions, including links to dozens of books and articles

i Note: “equitable relationship” here meaning a non-hierarchical view, where every element of the living environment is given equal value or agency. This goes together with the understanding that each element has its own natural role to perform, and should be allowed to do so. Incidentally, this means that the farmer must also get to know and perform their natural role.

v Altieri Miguel A. Linking ecologists and traditional farmers in the search for sustainable agriculture, Frontiers in Ecology and the Environment, 2004

x Lydon, Patrick. Farmers, Chefs, and Lawyers: Building an Ecology of One. The Nature of Cities, 2016